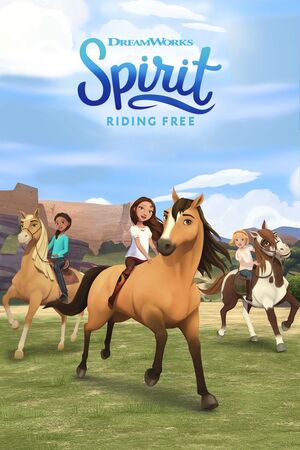 Spirit Riding Free is a computer-animated series produced by DreamWorks Animation Television and distributed by Netflix. Although the show is loosely based on the 2002 Oscar-nominated traditionally-animated film, Spirit: Stallion of the Cimarron, the series shares no characters, specific settings, artwork styles, or plot elements with the film, the sole relations between the two being that Spirit, the horse in the series, is the offspring of the Spirit from the film, and basic themes of freedom and life on the American frontier. The series comprises eight seasons and a total of fifty-two episodes, roughly 22 minutes each.

As of 2018, the first four seasons (one volume)have been released to DVD. Older episodes can be found for purchase on streaming services other than Netflix, such as YouTube and iTunes.

On September 2019, the following four seasons were released to DVD on the 24th.

Spirit Riding Free follows Lucky Prescott, who at the age of twelve relocates with her easygoing father and more strict aunt from the city back to the frontier town of Miradero, where she had lived from birth until the age of two. Leaving behind her city friends, Lucky strikes up friendships with two horseback-riding classmates, Abigail Stone and Pru Granger, and Lucky forms a special bond with a wild stallion she names Spirit, that was captured, but is now semi-wild. Lucky and her friends, known to each other as the "PALs" (an acronym for their names), attend school, ride the frontier on horseback, care for their horses, and have various adventures. The show focuses on themes of freedom versus familial and societal control, individuality versus conformity, class differences, growth and responsibility, and the meaning of making and keeping friends and loved ones. In particular, Lucky struggles to find identity by learning about a circus-star mother who died when Lucky was still too young to get to know her, and whose legacy in her family is threatened with being diminished when her father begins a relationship with the town's schoolteacher, Miss Flores.

LUCKY: Lucky is the female protagonist of the show, with brown hair and brown eyes. She is recognizably brave and selfless, and is determined to do anything for her friends. Lucky is shown to be smart and resourceful in many of her rescues. Lucky can also be very tough and stubborn, and her arch enemy is rules, implying that she is rebellious. Despite this, Lucky is still kind to most people that she meets.

SPIRIT: Spirit is the male protagonist of the show, a muscular buckskin Kiger mustang with black legs and hair. He is the son of Spirit from the movie and Rain. He is like his father in many ways. For example, they look just like each other. Like his father, Spirit is incredibly brave and strong. He isn't scared easily and on occasions, he is shown to have human-like intelligence. Spirit is a kind stallion as well and has a sense of humor.

PRU: Pru is one of the two deuteragonists of the show. She has dark skin, very dark brown hair and brown eyes and is tall. A recognizable thing about her is her intelligence. Pru is shown to be very smart and very mature about things. She is headstrong and brave and the most competitive. Despite her tough nature, Pru is still kind and caring and incredibly skilled.

ABIGAIL: Abigail is one of the two deuterangonists of the show. She is shorter than the other PALs and has short blond hair and blue eyes. She is a very kind and mature young girl, with a skill for baking. Abigail is clumsy but clever, however, she is also naive and gullible. She is a bit nervous sometimes, and not as eager as Pru and Lucky. This doesn't stop her from being brave though.

CHICA LINDA: Chica Linda is the female triagonist of the show. She has a blond mane and tail and is a palomino. She is smart and acrobatic and very kind and lovable. She is brave and is frequently in competitions with her rider. Chica Linda can also be a bit caught up in her appearance and doesn't really like to get messy. But she will do it for her friends and very playful.

BOOMERANG: Boomerang is the male triagonist of the show. He is a chestnut and white pinto male (presumed gelding) with brown eyes and is short. He is kind and friendly and often tries to help out. He is, despite being goofy and clumsy, a smart stallion and bold. Boomerang knows how to dance. He adores food and will eat anything that he thinks is delicious.