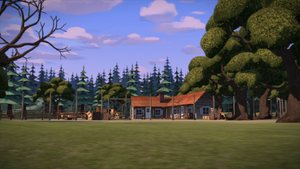 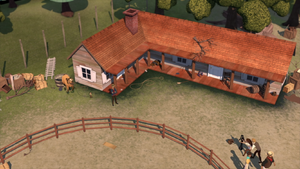 The Grayson ranch is the home and base of operations for horse wrangler Harlan Grayson. It is located outside of Miradero, up by Skull Rock and near the JP & Sons Railroad train tracks between that town and Cannon City. It includes an L-shaped house and a round horse corral, both surrounded by a tall barbed-wire fence.[1][2]

Lucky and Turo freed Junipero from the Grayson ranch.[1] Lucky and the PALs later also tried to free Spirit from the ranch, but Spirit had already been sent to auction in Cannon City.[2]

Grayson claimed the well on his ranch had not dried up during the drought, and sold buckets of water to the townspeople for five dollars a bucket (a full day's wages).[3]

In Lucky's third summer living back in Miradero, the PALs were conscripted into working on the ranch. Startled by the crows on a visit to the ranch to return a pocketwatch to Grayson that had been stolen by the crows, Lucky jumped onto a rocking chair on Grayson's porch and broke a window of the house. Grayson wanted the PALs to work a full seven days (a week) and would pay them each three dollars for the window to be paid for.[4]

Retrieved from "https://spirit-riding-free-fan.fandom.com/wiki/Grayson_ranch?oldid=4692"
Community content is available under CC-BY-SA unless otherwise noted.