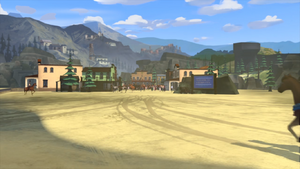 Cannon City is a frontier town near Miradero. The town comprises a number of buildings clustered around a main street, as well as additional homes and buildings on mountainsides surrounding the town. A sign reading "Welcome to Cannon City" sits at the right of the entrance to the town's main street, and a cannon sits to the left of the side. The train tracks into town enter a mountain tunnel at the left of the town.[1]

Cannon City was the site of a circus that Pru's father took her to for her fifth birthday, ending in an embarrassing incident that soured Pru to circuses until she finally joined one for a summer as a teenager.[2][3]

Cannon City hosted a Bi-Annual Equine Auction. Grayson sent Spirit to Cannon City by train to be sold at the auction.[4][1]

Pru's horse Chica Linda was scheduled to participate in a competition there the week after the earthquake.[5]

Turo told the PALs that Maricela's parents were taking them to hear the symphony in Cannon City on Halloween, but Turo and Maricela actually had a plan to scare the PALs in Miner's Grove that evening.[6]

Retrieved from "https://spirit-riding-free-fan.fandom.com/wiki/Cannon_City?oldid=2033"
Community content is available under CC-BY-SA unless otherwise noted.