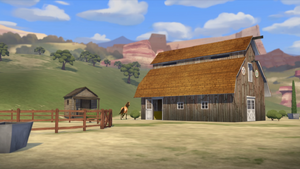 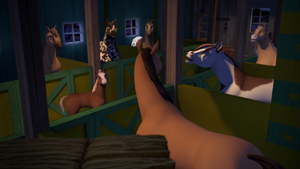 The barn, which belongs to Pru's father Mr. Granger, stables several horses, including Pru's horse Chica Linda and Abigail's horse Boomerang. The barn is located some distance away from Miradero's main street, between the town's schoolhouse (at the outskirts of town) and the Prescott house. A shed sits behind the barn, and two round fenced-in horse pens are nearby to the right and left of the barn, along with a larger, square, fenced-in horse yard called the ramada to the left of the barn. The barn is tended to by Mr. Granger, the PALs, and Turo.[1]

The PALs gave the barn a cosmetic upgrade, including fresh interior paint and hanging signs over the stalls with the names of their inhabitants, after Lucky's horse Spirit kicked out a wall of the barn to escape the barn after first being placed inside, necessitating repairs by the PALs.[1] Being a wild stallion who spends most of his time with his herd, Spirit did not initially have a dedicated stall in the barn, but Turo eventually installed a sign with Spirit's name over one of the stalls. Spirit's stall has a door that lets him come and go as he pleases.[1]

Spirit recovered in the barn after an attack by a mountain lion.[2]

Snips's donkey Señor Carrots is also stabled in the barn, at least occasionally.[3][4]

The barn has a hayloft that serves as the hangout of the PALs. The hayloft once collapsed under the weight of collected fool's gold and had to be rebuilt by Cousin Julian and Maricela.[5] Inspired by the hammock accommodations provided to the PALs when they joined El Circo Dos Grillos, they installed a hammock in the hayloft after returning to Miradero.[6]

The barn has a single electric light over the front door, and is also lit on the interior.[1]